It NEVER ends – snails, slugs, earwigs, aphids, mites, spittle bugs, leafminers, powdery mildew, sooty mildew … I’ve fought against all of these and then some this year alone. Some battles were lost, some won, all are eternal. Since no one ever posts pictures of this sort of ugliness in their gardens, I often feel like a lonely warrior fighting a losing war.

I’ve been having a serious problem with snails/slugs and earwigs lately. I sprinkled the beds liberally with Sluggo, only to find them mysteriously gone in a couple days. We have birds in the garden constantly, and I suspect the birds have been eating the Sluggo pellets. They don’t seem worse off for it. The snails and slugs, in the meanwhile, are carrying on undeterred. Yesterday, I bought a bag of diatomaceous earth and liberally dusted the leaves of the especially delectable plants. Diatomaceous earth is supposed to be effective only for a day or two and loses effectiveness when wet. We are having a few dry, sunny, warm days in the Bay Area so I thought this might be a good time to inflict death by a thousand cuts. I handled the diatomaceous earth with bare hands, it felt exactly like flour but caused a slight irritation later. I have a nice night blooming jasmine, Cestrum nocturnum, that I recently pruned to a rounded bush shape and all of the fresh, bright green growth has been savagely chewed up. I can’t imagine snails crawling 3 ft. up to get to the leaves at night, but haven’t noticed any caterpillars either. So I don’t know what’s been causing the damage.

I planted a few Shasta daisy, Leucanthemum x superbum ‘Amelia’ plants in late summer. They grew vigorously, forming tight, big rosettes of leaves. Right now the leaves look like someone went crazy on them with a paper punch – earwig damage. There are other perennials planted very closely with the Shasta daisies that are (relatively) untouched, clearly showing that the earwigs have a distinct preference for this particular plant. I don’t know about you, but I find earwigs especially frightening, they look vicious. Earwig damage is distinctive – small, round holes chewed through leaves and flowers. They can usually be found hiding very close to the damage. I’ve been known to spray them with jets of insecticidal soap and watch them perish with great satisfaction. One of the wins.

Meanwhile, our mature and productive clementine tree has a nasty case of sooty mold. Since the mold can be found growing on the “honeydew” secretions of aphids, mites or mealybugs, I quickly found the culprits underneath some of the leaves. It was an ugly sight. I don’t know which one of the bugs they were – some kind of fuzzy, white bugs. I crawled under the tree, since it’s a dwarf, and sprayed an entire bottle of insecticidal soap up onto the undersides of the leaves. I haven’t crawled back since to see if it helped.

And finally, I discovered today that my Arabian Jasmine Jasminum sambac ‘Mysore Mulli’ seems to be under attack from spider mites. Arrrgh! I sprayed the leaves quite thoroughly with water since they apparently don’t like moist conditions. If that doesn’t help, I’ll be whipping out the insecticidal soap – homemade this time using Dr. Bronner’s castile soap.

All of this has been in the last few weeks alone. Since I practice mostly organic fertilizing and pesticide practices, success is usually hard won, but longer lived. I feel good about that.

However, along with all this there is the good stuff too – the last few roses of the year, buds on the blueberry bushes, embryonic figs. Hope for the new year!

Wishing you a Merry Christmas! 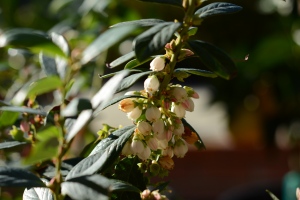 Hope in the form of blueberry flowers